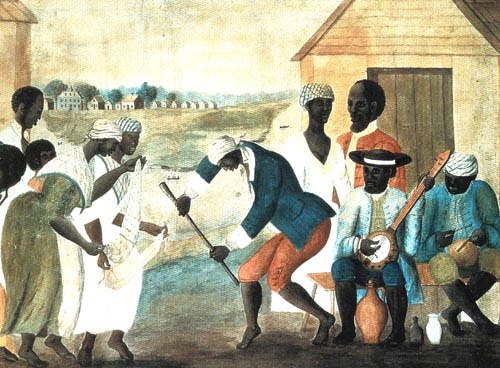 The Stedman 'Creole Bania': A Look at the World’s Oldest Banjo 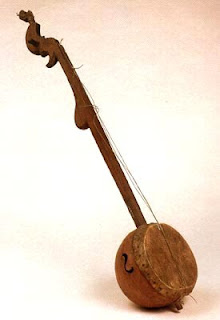 
The Creole Bania (above), currently on display in the Rijksmuseum voor Volkenkunde (National Museum of Ethnology; Leiden, the Netherlands), is considered to be the oldest extant example of the early gourd banjo (c. 1620 – 1860), the Afro-Creole/African American plucked spike lute that was the original type of banjo. [1] It is thought to have been collected in the northeastern South American country of Suriname (also formerly known as Dutch Guiana) by Captain John Gabriel Stedman (1744-1797), sometime between 1773 and 1777. [2]  During this period, Captain Stedman served with Colonel Louis Henry Fourgeoud's military expeditionary force, made up of foreign "volunteers," sent from the Netherlands to subdue "revolted Negroes" during the Dutch colony's First Boni-Maroon War (1768-1777). [3]  These “revolted Negroes” were, in fact, Maroons, escaped African and Afro-Creole slaves who formed independent communities in “the bush.” Today their descendents constitute distinct “tribes” (ethnic/linguistic groups) throughout the Caribbean and Latin America.


In addition to the instrument he brought back, Stedman also documented and illustrated the “Creole-Bania” as No. 15 in a group of eighteen different “instruments of sound” played by the “African Negroes” of Suriname in his book, Narrative of a Five Years Expedition against the Revolted Negroes of Surinam, from 1772 to 1777 (1790/1796, 1988/2010):


No. 15 is the Creole-Bania; this is like a mandoline or guitar, being made of a half gourd covered with a sheep-skin, to which is fixed a very long neck or handle; this instrument has but four strings, three long and one short, which is thick and serves for a bass; it is played by the fingers, and has a very agreeable sound, more so when accompanied by a song. [4]
Stedman's specification of the Creole-Bania's four strings as being "three long and one short" is the first and only period textual description of the typical string configuration for a 4-string early gourd banjo. Moreover, the accompanying illustration of the Creole-Bania in the top right corner of Narrative's Plate 69, "Musical Instruments of the African Negroes" (1790/1796, 1988/2010: 539) (see illustration top right on this page) clearly shows that the short string was the top fourth string, the one closest to the player's chest. This is akin to the short fifth string on the early gourd banjo's successor, the wood-rimmed 5-string banjo, which in banjo parlance is referred to as the thumb-string or chanterelle.

As in Stedman’s description and illustration, the instrument in the Leiden museum has four strings are attached to wooden friction tuning pegs in the lute’s elaborately carved peghead. The top short 'thumb string' was originally affixed to a wooden tuning peg that was inserted into a hole bored through the topside of a large bump on instrument's neck. That peg was broken off in its hole or replaced with a wooden dowel which had its ends cut off.

It is important to note that Dena J. Epstein -- the 'mother' of banjo roots research -- makes no mention of Stedman’s 1790/1796 account of the “Creole-Bania” nor of the one he brought back in either of her seminal works, “The Folk Banjo: A Documentary History,” Ethnomusicology, Vol. 19, No. 3 (Sep., 1975) and Sinful Tunes and Spirituals: Black Folk Music to the Civil War (University of Illinois Press, 1977, 2003). This may be due to the fact that her works were published before Richard and Sally Price’s 1979 journal article cited here. Yet, this would not explain why Epstein failed to include any reference to Stedman or the Creole Bania in the “Preface to the 2003 Paperback” of the reprint of Sinful Tunes & Spirituals. This was where she cited new findings made in the twenty-six years since her masterwork was first published. One possible reason for this major omission may have been the fact that Epstein focused her investigations on African American culture, music, and dance in the Anglophone and Francophone areas of the Caribbean and North America, and not South America.
'Creole Bania': A Look at Stedman’s Term
Curiously enough, in addition to the "Creole-Bania" (No. 15) Stedman also reports the designation bania as being used by Surinam's blacks to describe two other unrelated instruments. One was the “Ansokko-Bania” (No. 3), an unusual xylophone-like instrument comprised of "a hard board, supported on both sides like a low seat, on which are placed small blocks of different sizes... struck with two small sticks like a dulcimer." [5] The other was the “Loango-Bania” (No.10), a thumb-piano made of "a dry board, on which are laced, and kept down by a transverse bar, different sized elastic splinters of the palm tree." The bowl pictured directly below the Loango-Bania "is a large empty callebash [sic] to promote the sound [of the Loango-Bania]; the extremities of the splinters are snapt [sic] by the fingers, something in the manner of a piano-forte, when the music has a soft and very pleasing effect" (Stedman, 1796 / Price & Price, 1992: 277 - 278).
Clearly, "Bania" must have been a generic term for music instrument. Perhaps the word came from one of the many Central and West African tongues that went into the mix to form Suriname's unique African-rooted creole languages: Sranan Tongo, Saramaccan, and Aukan. Unfortunately, we may never know for sure as it is not in current usage nor, for that matter, has it been documented historically other than in Stedman's account. In fact, to the best of my research, the only place in the historical record that the term bania appears as a designation for music instruments seems to be in Stedman’s list of “the instruments of sound” made and played by Suriname’s blacks.

Having said that, in Stedman's hyphenated terms "Creole-Bania," “Loango-Bania,” and “Ansokko-Bania,” the prefixal words seem to indicate the given instrument's cultural origin and/or primary association. “Loango” was apparently a specific reference to slaves from the Vili Kingdom of Loango which was based on the central Atlantic coast of what is now the Republic of Congo. A large number of Suriname’s slaves where imported from that region. However, it is not clear what Stedman meant by the designation “Ansokko.” Just who were the “Ansokko” is mystifying as Stedman does not explicate the term nor does he use it anywhere else in his book. Moreover, it does not appear to be the appellation of any known ethnic group in Africa nor is it the name of any known Maroon tribe in Suriname.
As for “Creole Bania,” following the custom of the period, Stedman referred to blacks of African descent born in Europe’s New World colonies as “Creoles.” By characterizing this instrument as being “Creole,” Stedman conveys his understanding that the early gourd banjo he encountered in Suriname was not something that was brought over from Africa. Rather, he perceived it as a folk instrument unique to Surinamese Creoles and, therefore, a product of the African Diaspora in the New World, as opposed to an African import.

Detail, "Musical Instruments of the African Negroes [of Suriname]." From John Gabriel Stedman's "Narrative of a Five Years Expedition against the Revolted Negroes of Surinam, from 1772 to 1777" (1796). The instrument depicted on the right is an early 4-string gourd banjo, the Creole Bania. Stedman brought back an actual Creole Bania when he returned to Holland in 1777. It's currently in the Rijksmuseum voor Volkenkunde (National Museum of Ethnology, Leiden, Holland) making it the world's oldest banjo.

Welcome to the Banjo Roots Blog!

BANJO ROOTS RESEARCH is the empirical study of the banjo's early history, its origins in the African Diaspora of the Americas, and its deep roots in West Africa, the wellspring of the banjo’s African heritage. Combining investigations of the historical record with crosscultural explorations of living traditions, banjo roots research is part and parcel of the broader spectrum of banjo studies: banjology.

This scholarly pursuit can trace its own roots to the groundbreaking investigations of the historical record by such pioneers as Dena J. Epstein and Eileen J. Southern. However, it’s only in recent years that banjo roots research has crystallized into a distinct field of inquiry and study.

Using modern organological classification and analysis, banjo roots research and banjology trace the 'banjo genome' through the various morphological and stylistic 'genetic markers'. This begins with the early gourd banjo, the original type of banjo. It was a plucked spike lute that first emerged in the circum-Caribbean during the 17th century as an Afro-Creole/African American folk instrument.

The genetic trail continues with the early gourd banjo's offspring and successor, the wood-rimmed early 5-string banjo, which first appeared in the United States around 1840. And it carries on with the classic 5-string banjo (c.1880-1920) and the eventual development of the modern banjo family that we know today.

The study of the banjo's 'genetic markers' enables us to reconnect the instrument to its West African lineage, as seen in the more than 60 distinct traditions of plucked spike lute still found throughout West Africa. Likewise, it links the banjo to its North African cousins: the Gnawa hajhuj (also known as the gnbri and sintir) of Morocco and Algeria and the Sudan Tunis gumbri (also gombri) of Tunisia, both of which are also of West African heritage. By the same token, this also indicates the banjo's kinship to the plucked spike lutes of the Berbers, such as the Amazigh loutar (also guimbri) and Chleuh lotar of Morocco.

Moreover, the 'banjo genome' extends back over 4000 years ago to earliest known lutes -- the plucked spike lutes of ancient Mesopotamia, and their descendents throughout the ancient Near East and Pharonic Egypt.

In the effort to establish the banjo's 'DNA profile', we also study the people who have created and played all of these historical and/or contemporary instruments. Furthermore, we examine the historic sociocultural matrices and conditions that resulted in the production of the these instruments, their original performance contexts, as well as the music played on them and the techniques used to play them.

We hope you will enjoy your visit to this site. Please feel free to participate in the ongoing discussions by posting comments. Just click on the COMMENTS prompt at the end of each article.